Home Wrestling News Bret Hart Talks About Being Lied To By People In WWE, His...

As noted, WWE Hall Of Famer Bret Hart recently spoke with The Calgary Herald for an interview. Below are some additional highlights.

On being lied to by people he worked with in WWE for years during the Montreal Screwjob incident: “To be lied to and screwed over legitimately by people that I had worked so hard for, I think it’s always been a black eye on them, not me. Everything I said was true, everything that I said happened, it happened the way it did.”

On his initial goals when getting into the wrestling business: “I got into wrestling to make some money, see the world, and meet girls. I accomplished that. Those were my initial goals. When I look back on everything, I’m really amazed by my career. I had so many wonderful guys that I worked with and great matches, that’s what was most important to me — and the fans. I had a great fan base across the country and around the world.”

Check out the complete Bret Hart interview at CalgaryHerald.com. 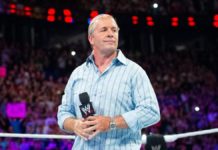 Bret Hart Recalls Knocking Out Vince McMahon: “It Was Such A Beautiful Punch”

Bret Hart Explains Why He Couldn’t Be A WWE Writer, Possibly Working For NXT

Bret Hart On Getting Closure With HBK, His Feelings Towards Eric Bischoff & More

JBL Makes His Case: “What In The World Is Bret Hart So Mad At?”

Bret Hart On Dreaming About Wrestling Kurt Angle, Harmful Surgery He Had In 2015

November 22, 2017
- Below is the latest episode of WWE Unboxed with Zack Ryder, featuring highly detailed action figures of Buzz Lightyear and Sheriff Woody to...

Lana Tries To Get Friendly With Ruby Riot & Crew, Fans On Paige, Nikki...

November 22, 2017
- After being eliminated from the competition several weeks back, Nikki Bella and Artem Chigvintsev returned to ABC's Dancing With The Stars for last...

November 22, 2017
The November 21st edition of WWE SmackDown Live was the first episode after Survivor Series 2017, and took place at the Toyota Center in...

Spoiler On Plans For WWE Clash Of Champions

November 21, 2017
Jinder Mahal vs. WWE Champion AJ Styles is currently planned as the main event of the WWE Clash of Champions pay-per-view, according to PWInsider. WWE...

November 22, 2017
It was confirmed on tonight's WWE 205 Live episode that the next call-up from WWE NXT will see Hideo Itami join the cruiserweight division. Itami's...

November 22, 2017
- Below are the top 10 moments from last night's WWE SmackDown in Houston: - WWE has dropped the first names for Erick Rowan and...