- Jim Ross appeared on ESPN’s SportsNation this week. The WWE Hall Of Famer mentioned that the Kazuchika Okada vs. Kenny Omega match that aired on AXS TV on Friday might be the best match that he has ever called. Check out a clip of JR’s appearance on the show above.

- WWE Superstars Cesaro, Sheamus and Curtis Axel were in attendance at Minnesota Vikings’ NFL game on Sunday at U.S. Bank Stadium. The trio took part in the pre-game ceremony with the hometown boy Axel blowing the giant Gjallarhorn. Check out a photo from Cesaro’s official Twitter page below.

Had a great time leading the @Vikings #skol chant with these fellas! Plus @RealCurtisAxel got to blow the Gjallarhorn. Now #WWETLC #TheBar pic.twitter.com/CltsuxujZE 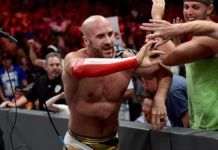 Cesaro Reveals When He Found Out About Sheamus Tag-Team, Mouth Injury Cesaro On Bad Dental Injury At No Mercy, How His Teeth Are Now, Sheamus December 26, 2017
Seth Rollins and Jason Jordan defeated The Bar in the main event of tonight's Christmas edition of WWE RAW from Chicago to become the...

December 26, 2017
Absolution backstage at the Christmas Edition of WWE RAW

December 26, 2017
Reload often during RAW for results & videos as they are available... [youtube https://www.youtube.com/watch?v=2iAyXweA3WQ?rel=0&w=560&h=315] - Tonight's Christmas edition of WWE RAW opens live from the Allstate...

December 26, 2017
Reload often during RAW for results & videos as they are available... [youtube https://www.youtube.com/watch?v=2iAyXweA3WQ?rel=0&w=560&h=315] - Tonight's Christmas edition of WWE RAW opens live from the Allstate...

December 25, 2017
The Nationwide Arena in Columbus, Ohio has announced a Fatal 5 Way for the WWE Title as the main event of the March 11th...

December 25, 2017
Merry Christmas and Happy Holidays from everyone here at the site. Be sure to join us tonight at 8pm EST for live coverage of...

Hideo Itami Knocks CM Punk Before RAW In Chicago, The Rock - Walk Of...

December 26, 2017
- The Rock's YouTube channel posted this exclusive video from his recent Hollywood Walk of Fame ceremony. As noted, Rock's star is located at...

December 24, 2017
Batista, Titus Oneil, and Cesaro at an event in Tampa
ad