The following are highlights of a new interview with Matt Sydal, formerly known as “Evan Bourne” in WWE:

On recovering from injuries in pro wrestling: “Injuries are two-fold, as professional wrestlers we walk to the ring feeling completely invincible. When I step into the ring, there’s no doubt in my mind, there’s no hesitation, there’s no second thoughts, it’s a 110 percent, full force all the time. If you walk into the ring worried about your ankle, if you walk into the ring worried about your neck, that’s only going to increase the likelihood of something bad or something traumatic happening or getting worse. So when you’re coming back from an injury the keys are that mental game, getting that locked up, and then the physical game’s gonna come because as wrestlers we know what we need our bodies to feel like. That first match back it does not feel good, that second match doesn’t feel good. I mean when I came back I felt like I was drowning in a sea of super athletic young wrestlers. These guys were taking me into the middle of the ring, taking me out into deep waters and seeing if I could sink or swim.”

On teaming with Jushin Thunder Liger: “If there was a Hall of Fame for junior heavyweights he would have his own wing. He’s one of the guys who brought wrestling from Canada, Mexico, and Japan, and combined them into a really magical style of wrestling and that’s what connected with me when I was a young man. The style of Jushin Thunder Liger is how I’ve been molding myself.”

On NXT: “It’s brilliant. This is a third brand that can tour, it’s a third stream of revenue for the WWE, it’s extremely cost effective, and you’re giving amazing talent that has a fanbase a platform that can reach more people. That’s the beauty of NXT, because it just goes to show that the men who walk through Ring of Honor are WWE caliber people. Because there is no difference between Kevin Owens, your NXT Champion, and Kevin Steen, your Ring of Honor Champion. Between Seth Rollins, your Ring of Honor World Champion, and Seth Rollins, your WWE World Champion.”

Check out the complete interview at ChadDukesWrestlingShow.com. 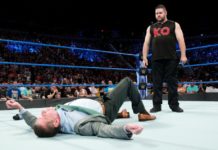 December 8, 2017
- Below is the latest WWE Network Pick of the Week video, featuring Corey Graves plugging the premiere of his new "Straight To The...

December 8, 2017
WWE NXT Women's Champion Ember Moon recently spoke with Byron Saxton for the WWE website. The full interview is at this link and below...

December 8, 2017
- Below is the first trailer for E!'s "WAGS Atlanta" featuring former WWE and Impact Wrestling star Brandi Rhodes, among others. The first season...

December 8, 2017
Triple H appeared at an event in Abu Dhabi earlier today to officially welcome Nasser Alruwayeh to the company. Nasser is the first man...

December 7, 2017
There's been speculation on WWE teasing a Shane McMahon vs. Daniel Bryan match but the match has not been discussed, according to the Wrestling...

December 7, 2017
- As seen below in the new video from Cathy Kelley, RAW General Manager Kurt Angle has announced the following matches for Monday's RAW...
ad