- As seen below, Sasha Banks is featured on the latest episode of “Her Take” from Champs Sports. The interview was filmed at the WWE Performance Center in Orlando. The Boss talks to host Steph Lecor about her journey to WWE, the state of women’s wrestling, sneakers, cutting promos and more. Sasha also does a “Her Take” segment and picks WWE NXT over RAW, Chyna over Sable and Steve Austin over The Rock. Sasha adds that she loves Austin and Rock but she picks Austin because he once “slid into her DMs” on Twitter to compliment her on a match.

- Shayna Baszler was backstage for last night’s WWE NXT TV tapings at Full Sail University and took time to pose for a few photos with fans before the show. She did not work the tapings and there’s been no confirmation on her signing with the company but there is speculation on her status after Triple H welcomed both Baszler and Kairi Sane to the company with a tweet before Tuesday’s Mae Young Classic finals.

- WWE Intercontinental Champion The Miz is now the third-longest reigning IC Champion in WWE history after passing The Honky Tonk Man on Thursday. Miz has more than 450 days recognized by WWE. Ahead of him are WWE Hall of Famer Don Muraco with 541 days and WWE Hall of Famer Pedro Morales with 619 days. Miz tweeted on the milestone: 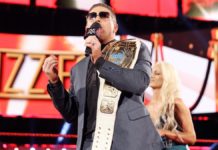 The Miz On Why Lesnar Is On Top In WWE, If Reigns Has “It,” Back-Stabbing

The Miz Says SmackDown Is Better Than RAW, Talks Inspiration For His Promos

September 19, 2017
The September 19th edition of WWE SmackDown Live takes place at the Oracle Arena in Oakland, CA, and is the go-home show for Sunday's...

Paige On Day 2 At The WWE PC, Shinsuke Nakamura Video From Osaka, Fans...

September 19, 2017
- Below is video of Shinsuke Nakamura's big entrance at Saturday's WWE live event in Osaka, Japan, plus the backstage promo that we posted...

September 18, 2017
The September 18th edition of WWE RAW took place at the SAP Center in San Jose, CA. This was the last episode of RAW...

Vince McMahon & Others Comment On The Death Of Bobby Heenan

September 18, 2017
As noted, WWE Hall of Famer Bobby "The Brain" Heenan has passed away. There are conflicting reports on Heenan's age as Wikipedia has him...

Update On John Cena’s Status For RAW, WWE On Cena vs. Roman Reigns No...

September 17, 2017
It's still possible that John Cena makes it to Monday's RAW in San Jose, the final red brand show before his match with Roman...

WWE Tag Team Getting Back Together?, Batista In Blade Runner 2049 Short (Video), David...

September 17, 2017
- The promotion for the Blade Runner 2049 sequel features three short prequels to the new story and as seen below, the second prequel...

September 18, 2017
As noted, Impact Wrestling announced today that the November 5th Bound For Glory pay-per-view will take place from the Aberdeen Pavilion in Ottawa, Ontario,...