By now, the majority of the pro wrestling world has been made aware of the shoot incident that took place between Sexy Starr and GFW Knockout Rosemary at the recent AAA TripleMania pay-per-view, one that resulted in the latter suffering arm injuries.

Since the incident went down at the PPV show last weekend, Rosemary has come out with a lengthy statement giving her side of the situation, while Starr has remained silent for the most part.

This week, Sexy Starr finally broke her silence in a new Spanish interview that surfaced on the internet today. Featured above is the interview, which originated from rderudo.com. Featured below is a rough English translation of the comments Starr made in Spanish during the interview.

“This have been very difficult days for me,” Sexy Star said. “Last Saturday, I was in a championship fight [and it] was very hard. I think everything got out of hand. I don’t know, I am still confused with the situation. I’d like to remain quiet and when the time is right I will speak on the subject.”

Starr continued, “Men and women want to finish me, make me retire from the sport. I am still here, as I stated in the beginning, I will not stop representing all those women that have been mistreated physically or psychologically. I believe that I have to [be] stronger. If at a moment I went through depression and got out of it, I will also get out of this one.

“I was doing what I had to do, what the people deserved, to go all in clawing until the end. That’s what happened, I submitted her. It appears the girl is injured, I don’t know, [it] is not something I am aware of. That’s all I can say.” 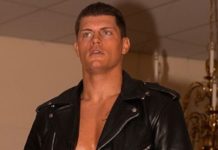 Hornswoggle Reveals Best Thing He Ever Did In WWE, Talks Working Indies

Chris Jericho Says Conor McGregor “Will Definitely End Up” In WWE, Explains Why