Want the answers to the most burning questions surrounding the “Big Dog”…like what’s the deal with the Shield Reunion? Or those crowd reactions? Is there any unfinished business with John Cena…or the Undertaker?!? Find out all that, and MORE tonight…when WWE’s Corey Graves goes Straight to the Source himself…Roman Reigns. Videos: Preview Of “WWE Straight To The Source: Roman Reigns” For Tonight 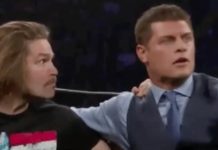 March 16, 2018
WWE UK Superstar Tyler Bate is currently out of action with a minor knee injury, according to The Wrestling Observer Newsletter. As indicated in recent...

March 16, 2018
WWE has already confirmed the WrestleMania 35 location ahead of today's press conference. Below is the first announcement: WrestleMania returns to MetLife Stadium in April...

Jeff Hardy Was Set For The Ultimate Deletion, Reby Hardy Lashes Out Over Jeff?

March 16, 2018
Jeff Hardy was scheduled to return to WWE TV on next Monday's RAW in The Ultimate Deletion between Matt Hardy and Bray Wyatt, according...

March 15, 2018
There will be a second Triple Threat for a singles title at WrestleMania 34 as WWE United States Champion Randy Orton is currently scheduled...

WWE Announcement On The Women’s Battle Royal At WrestleMania 34

March 16, 2018
As noted, WWE announced today that they are changing the name from the first-ever Fabulous Moolah Memorial Battle Royal at WrestleMania 34 due to...

March 16, 2018
WWE has already confirmed the WrestleMania 35 location ahead of today's press conference. Below is the first announcement: WrestleMania returns to MetLife Stadium in April...
ad