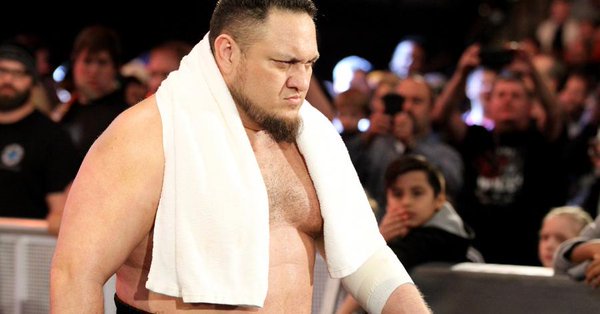 As noted, RAW General Manager Kurt Angle revealed on Twitter that Samoa Joe suffered an injury in the match with Rhyno on last night’s RAW, causing him to be pulled from WWE’s Mixed Match Challenge.

The injury to Joe is legitimate and not a part of the storylines. No word yet on when he will be back in action but he’s suffering from a right foot injury and will be undergoing an MRI. As noted, Joe announced on RAW that he will be in the 30-man Royal Rumble match later this month.

“During his match, [Samoa Joe] felt a pop at the bottom of his [right] foot,” said WWE Senior Ringside Physician Dr. Chris Amann. “We took a look and believe he has a plantar fascia rupture, which is a thick tissue rupture under the foot. We will get an MRI to confirm. Treatment includes a period of immobilization in a boot with crutches and platelet rich plasma injections.”