Home Lists 5 Superstars On SmackDown That Would Be A Better WWE Champion Than...

Jinder Mahal’s run as WWE Champion has been a disaster so far. His promos have been for the most part boring, now they have become lazy and controversial. The feud between Jinder Mahal and Shinsuke Nakamura has simply been Mahal poking fun at Nakamura because he is Japanese. WWE’s Hell in a Cell PPV is less than two weeks away and the WWE Championship match feels like the third most important match on the card. Here are 5 Superstars on SmackDown’s roster that would make a better WWE Champion:

Let’s start with the most obvious Superstar and hopefully the Superstar that will be taking the WWE Championship away from Jinder Mahal on October 8th, Shinsuke Nakamura. Shinsuke might not be great at cutting promos, but he is infinitely better than Mahal in the ring. Nakamura can feud with anyone on SmackDown’s roster and make them a better performer in the ring. Well, except Jinder Mahal. 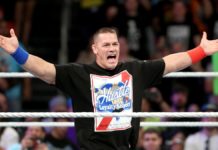 February 24, 2018
A number of Impact Wrestling talents recently reached out to PWInsider and alleged that they have not been paid for the January 2018 TV...

February 24, 2018
Elias recently spoke with Yahoo Sports to promote Sunday's WWE Elimination Chamber pay-per-view. The full interview is at this link and below are highlights: It...

February 24, 2018
As noted earlier via Justin Barrasso of Sports Illustrated, Dolph Ziggler recently signed a new two-year deal with WWE that is worth a $1.5...

February 24, 2018
A number of Impact Wrestling talents recently reached out to PWInsider and alleged that they have not been paid for the January 2018 TV...