WWE TLC 2017 airs this Sunday on the WWE Network. The Shield will face an uphill battle when they challenge The Miz, The Bar, Braun Strowman and Kane in a TLC match. There have been some great TLC matches and some not so great TLC matches in the past. Here are the 5 worst TLC matches of all-time:

It was the first episode of the new year and it opened up with one of the worst TLC matches of all-time. The match itself was solid, it just completely failed to live up the TLC name. It just felt like another match. It didn’t feel special and that is mostly because it took place on RAW instead of a PPV.

If Ryback and CM Punk had put on a spectacular match, it would have been able to overcome the fact that it went down on an episode of RAW. Unfortunately, the match was mediocre at best and featured The Shield interfering and costing Ryback the match. CM Punk then climbed up the ladder and won as Ryback was unable to get back in the ring due to the attack from Reigns, Ambrose and Rollins. 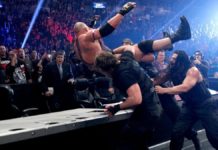 February 20, 2018
Impact took to Twitter today and congratulated former co-founder Jeff Jarrett on his WWE Hall of Fame induction. Jarrett c-founded TNA back in 2002 with...

February 21, 2018
Actor Terry Crews took to Twitter this week and accused WWE of stealing his last name for Apollo Crews, who is now being billed...
ad