Tuesday’s SmackDown was the last stop before TLC 2016, and there were several developments that will change Sunday’s pay-per-view. It was announced on Tuesday at Becky Lynch’s Women’s Title defense against Alexa Bliss will now be a Tables Match, and we also learned that Randy Orton and Bray Wyatt will be getting a shot at Heath Slater & Rhyno’s Tag Team Titles.

Below is the updated card for WWE TLC 2016, which airs live this Sunday on pay-per-view and the WWE Network.

- AJ Styles (c) vs. Dean Ambrose for the World Championship in a TLC Match

- The Miz (c) vs. Dolph Ziggler for the Intercontinental Championship in a Ladder Match

- Becky Lynch (c) vs. Alexa Bliss from the Women’s Championship in a Tables Match

- Carmella vs. Nikki Bella in a No DQ match

- Kalisto vs. Baron Corbin in a Chairs Match 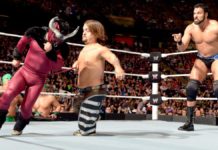