Roman Reigns, Seth Rollins and Dean Ambrose recently reunited as The Shield on Monday’s episode of RAW. The trio picked up right where they left off and beatdown The Miz and Braun Strowman. The Shield will now face The Miz, Cesaro, Sheamus and Braun Strowman at WWE’s TLC PPV next Sunday. Here are the 5 best matches The Shield have had in WWE:

Daniel Bryan and Kane eventually made their way down to the ring and the match wound up turning into a war between the two teams. Kane planted Ambrose with a Chokeslam and Daniel Bryan tried to follow it up with a Flying Headbutt off the top rope. Ambrose was able to get out of the way and The Shield emerged victorious. 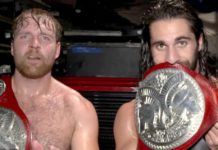 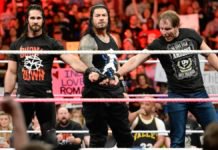 October 25, 2017
- Below is the latest episode of WWE Playlist with The Undertaker's most supernatural moments: - WWE filed to trademark the term "Immune To Fear"...

October 25, 2017
- Below is video of WWE Intercontinental Champion The Miz talking to TMZ Sports about he and Maryse expecting their first baby girl in...

October 25, 2017
- Title Match Wrestling posted this video of a September WrestlePro match between Ryback (The Big Guy) and AR Fox, which some are calling...