Home Wrestling News Update On Jeff Hardy’s Shoulder Injury, When He Is Scheduled To Return Featured below is a new video interview with The Hardy Boyz — Matt and Jeff Hardy — where they discuss the importance of Starrcade to them and their home state of North Carolina.

During the interview, Jeff Hardy gave an update on his shoulder injury. According to “The Charismatic Enigma,” his rehab is going good and he is on the right track to making a full recovery.

“So far so good, my physical therapist says it’s moving great,” Jeff said. “It doesn’t feel great, naturally it hurts, I can only do so much.”

Hardy continued, “But I’m on the right track, so, hopefully after another month I’ll be able to lift a little weight and start building up my chest and my arms. Hopefully, by April, I’ll be good to go and actually get back in the ring and do what Jeff Hardy loves to do.” 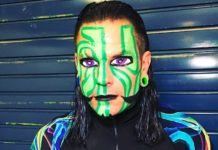 January 24, 2018
Triple H revealed during today's media call that Kassius Ohno vs. The Velveteen Dream has been added to Saturday's WWE NXT "Takeover: Philadelphia" card. It...

January 24, 2018
- WWE posted this video of WWE Hall of Famer Scott Hall reminiscing at The Manhattan Center during the RAW 25 event on Monday...

WWE SmackDown Viewership For The Final Show Before Royal Rumble

January 24, 2018
7:15pm EST Update: Enzo has denied the accusations through a statement from his lawyer. Read the statement by clicking here. As noted, WWE has fired...

January 24, 2018
Enzo Amore took to Twitter this evening and issued a statement from his lawyers in response to the rape allegations from Philomena Sheahan, who...