This week’s episode of RAW kicked off with RAW GM Kurt Angle apologizing to the entire RAW roster as they stood on the entrance ramp. Angle was quickly interrupted by Stephanie McMahon who marched down to the ring. Stephanie admitted that Angle was doing a good job and that he had earned her respect.

Stephanie then added that she lost her respect for Angle when he allowed her brother, Shane McMahon, to invade RAW with the SmackDown roster. Stephanie then made Angle the captain of the men’s team at Survivor Series and stated that she expected RAW to dominate at the event. Stephanie got in Angle’s face and warned him that if RAW doesn’t emerge victorious at Survivor Series, she may need to replace Kurt Angle as the RAW GM. 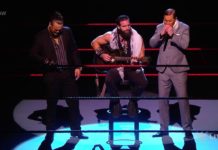 January 2, 2018
- Below is a promo for the first WWE SmackDown of 2018, featuring WWE Champion AJ Styles facing Sami Zayn in a non-title match....

WWE Confirms Why Enzo Amore Is Missing RAW, Video from the Hospital

January 2, 2018
WWE and Cruiserweight Champion Enzo Amore have confirmed that he missed tonight's RAW from Miami due being hospitalized with an illness. It appears Enzo...

January 1, 2018
The first WWE RAW of 2018 will take place tonight from the American Airlines Arena in Miami, Florida with an appearance by WWE Universal...
ad