The November 28th episode of WWE SmackDown aired live from the Rupp Arena in Lexington, KY. Here are 3 winners and losers from this week’s episode of SmackDown:

Ruby Riot, Sarah Logan and Liv Morgan faced Charlotte, Natalya and Naomi tonight. Natalya wound up abandoning her teammates and that made it a 3-on-2 match. Morgan and Logan took out Naomi ringside and smashed her into the steel steps.

The Riott Squad then dismantled Charlotte in the ring. Charlotte fought back for a moment, but she couldn’t overcome all three Superstars. Riot pinned Charlotte and the Riot Squad picked up their first victory on SmackDown over the SmackDown Women’s Champion. The name “Riott Squad” is pretty awful, but the trio have the chance to become a dominant force in the SmackDown women’s division. 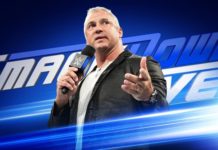 WWE SmackDown Viewership For The Post-Royal Rumble Episode, Up Against Trump’s SOTU

January 31, 2018
Reload often for new videos and results as they are available... [youtube https://www.youtube.com/watch?v=C9EOcTRCVk8?rel=0&w=560&h=315] - Tonight's WWE SmackDown opens live from the Wells Fargo Center in Philadelphia....

January 31, 2018
It was announced on tonight's WWE 205 Live episode that the new General Manager for the brand will be former Impact star Rockstar Spud....

January 30, 2018
As noted, WWE has signed veteran Impact Wrestling employee Jeremy Borash to a deal. PWInsider reports that the hire was a Triple H decision...

January 31, 2018
- UFC President Dana White spoke with The Las Vegas Review-Journal about Ronda Rousey signing a multi-year deal with WWE and noted that he...
ad