- This week’s broadcast opens up with a video recapping the history between Shane McMahon, Kevin Owens, Sami Zayn, and Daniel Bryan.

- SmackDown Commissioner Shane McMahon comes out to the ring to kick off tonight’s show. Shane talks about wanting to fire Owens and Zayn, and then he brings out Daniel Bryan. SmackDown GM Daniel Bryan comes out to the ring, and talks to Shane about not letting his temper get in the way of business. Shane says Owens and Zayn not only beat his father and cost him a match, but also betrayed the entire SmackDown roster. Bryan says Owens and Zayn were just trying to grab the brass ring and compete, and if they fire them, they’ll just end up on RAW. Shane says that’s great, then Owens and Zayn will be his sister’s problem. Bryan says he’s not a yes-man or a puppet, he’s here to recognize in-ring talent and give opportunities, and Shane has to trust him. Shane says he trusts him, and he likes the match Bryan booked for tonight: Owens vs. Randy Orton. Shane says he’s going to add to the match a little bit: Sami Zayn is barred from ringside, and it’s a no DQ match. Shane and Daniel shake on it, then head to the back.

- Owens and Zayn are backstage complaining about how SmackDown management keeps stacking the deck against them. They find Daniel Bryan and complain to him about Shane making this a no DQ match. They want the stipulation to be removed, but Bryan tells them “hell no.”

- The New Day vs. Chad Gable & Shelton Benjamin: The Usos are on commentary for this one, and Big E gives them some pancakes. Kofi and Xavier will be representing The New Day. Gable takes down Woods to start, but Woods fires back with an elbow to the face. They fight back and forth until Benjamin gets the tag and hits a flying kick to Woods’ face. Benjamin and Gable now trade tags and take turns beating on Woods. Benjamin does some damage to Woods with a series of knee strikes, then he picks up Woods for Gable to hit a flying knee off the middle rope on him. Gable takes a minute to cheap-shot Kofi on the apron too. Gable and Woods start fighting in the corner, which leads to Woods hitting a missile dropkick. Kofi and Shelton get the tags, and Kofi hits a flying kick off the ropes. Kofi follows up with a series of strikes. Benjamin tries to turn it around and whips Kofi into the corner, but Kofi fires back with a kick and then a flying cross body. Kofi hits a flying clothesline, and then a leg drop. Kofi goes for the Trouble In Paradise, but Shelton catches him in mid-air. Shelton tries to throw Kofi outside, but Kofi dumps him outside instead. Kofi dumps Gable outside too, and Woods follows up with a suicide dive onto both Gable and Benjamin. Back in the ring, they hit the Up Up Down Down on Benjamin for the three count. After the match, Big E hits the ring and The New Day dances and celebrates.

- Charlotte is backstage talking to Naomi about the sneak attack last week by the new women on the SmackDown roster. Natalya walks in and tells Charlotte she should be thanking them for interrupting their match. Charlotte tells Natalya to sit this one out, but Natalya says she needs her tonight.

- We see a video promoting The Bludgeon Brothers - Luke Harper and Eric Rowan. They’re in action next.

- Luke Harper & Eric Rowans vs. The Hype Bros: Harper and Rowan dominate this one out of the gate with clotheslines and splashes in the corner. They throw Mojo to the outside, then double team Ryder. Harper hits a side suplex, then tags in Rowan and they do a double chokeslam on Ryder.

- After the match, Ryder does an in-ring interview where he talks about their losing streak and how they need to get back in the game. Mojo attacks Ryder from behind and starts beating him down. Mojo yells at Ryder that the Hype Bros are dead as he pummels on his now-former partner. Officials finally haul off Mojo and he walks to the back.

- We see Mojo walking backstage, and he gets approached by an interviewer. He’s asked why he attacked Ryder, and Mojo just says that “the landscape has change.”

- We see a recap of Baron Corbin and Bobby Roode getting into last week. Roode does an interview backstage where he trashes Corbin. Roode says he’s smarter, better, and is going to take away Corbin’s United States Championship. Corbin interrupts and says he’s not scared of Roode. Roode says if Corbin isn’t scared, why doesn’t he put the U.S. Title on the line against him tonight. Corbin says no and walks off.

- AJ Styles vs. The Singh Brothers: This is a two-on-one handicap match. Before the opening bell, Jinder cracks AJ in the face and starts stomping on him. The Singh Brothers join in on the beatdown as the ref tries to get Jinder out of the ring. They continue to beat down AJ, and Jinder throws him into the ring post and out of the ring. AJ recovers at ringside and tells the ref he’s good to compete. The ref kicks Jinder out of the ring, AJ comes back in and the opening bell sounds. The Singh Brothers immediately jump on AJ and double team him. They continue the assault until AJ finally starts firing back and fighting his way up. They take out AJ’s knee and The Phenomenal One is grounded once again. They start fighting in the corner and Styles knocks one of the brothers down, then he hits a Styles Clash on the other one off the middle rope onto his brother. AJ scores the three count, then flees the ring as Jinder runs in. Jinder backs up the ramp holding up his WWE Title belt as Jinder freaks out in the ring. Jinder gives the Khallas to each of the Singh Brothers.

- We go to a backstage interview with Ruby Riott, Liv Morgan, and Sarah Logan. They say their group is called the Riot Squad. Ruby says they’re there to turn the SmackDown women’s division upside down.

- The New Day cuts a pre-taped promo for some deals on WWEShop.com.

- Natalya, Charlotte & Naomi vs. Liv Morgan, Sarah Logan & Ruby Riott: Natalya and Ruby start this one off and Ruby takes control early on with strikes. She boots Natalya in the head, then Charlotte and Sarah tag in. Natalya leaves the ring and says she doesn’t want anything to do with any of them, she’s outta here. Charlotte and Liv now go at it and Charlotte tees off with a series of chops to the chest. The Riot Squad turns it around off a cheap shot, and Ruby now works on keeping Charlotte grounded. Naomi now starts going at it at ringside with Liv and Sarah, and they double team her and beat her down. They slingshot Naomi into the steel steps at ringside as Ruby keeps Charlotte grounded in the ring. The ref calls for help for Naomi at ringside. Back in the ring, all three women take turns continuing the beat down on Charlotte. Charlotte finally starts firing up and she sends Ruby face-first into the middle turnbuckle. She hits a shot on Liv, but Sarah hits a cheap shot on Charlotte over the ropes to kill her momentum. Ruby capitalizes on the cheap shot and rolls up Charlotte for the three count.

- As the Riot Squad celebrates their win, we see Naomi getting put on a stretcher at ringside.

- We go backstage for an interview with Randy Orton, but he no-sells the interviewer and walks right past then. He starts heading directly to the gorilla position for his upcoming no DQ match.

- It’s time for the latest edition of the Fashion Files. Breezango and The Ascension are chained up in bathroom, like in the Saw movie. A puppet comes on a tv screen and tells them they have to escape before a poisonous gas fills the room. They see the destroyed toy horse in a bag, and find the key inside of him. Fandango and Breeze get unlocked, while The Ascension says they’ll sacrifice themselves for their best friends. Breezango had enough time to save them, but they just head off anyways while The Ascension bids them farewell. To be continued.

- Randy Orton vs. Kevin Owens: This one is a no DQ match and Sami Zayn is banned from ringside. The opening bell sounds and Orton goes right to work on Owens. He takes Orton outside early on and beats him down around ringside before back suplexing him onto the announce table. Orton grabs a kendo stick and starts teeing off on Owens on the floor. Owens now grabs a kendo stick of his own and starts fighting back. Back in the ring, Owens now mounts a comeback and starts pummeling on Orton. Orton hits a thumb to the eye to stun Owens, but Owens is able to keep control of the match and hit a senton drop for a two count. Owens misses a cannonball splash in the corner, then starts trading punches with Orton. Orton hits some headbutts and takes Owens up top for a superplex for a two count. Orton goes for a DDT, but Owens escapes and the fight spills out to ringside. Orton hits the back suplex on the announce table, then the two brawl up the entrance ramp. Orton beats down Owens on the stage, then back down the ramp towards the stage. Sami Zayn now runs in from behind and starts beating on Orton with a steel chair. Zayn repeatedly bashes Orton with the steel chair, then leaves. Owens takes Orton back into the ring, but Orton catches him on the way back in through the ropes and DDTs him. Orton goes for an RKO, but Owens blocks it and takes out Orton’s knee. Owens hits a superkick, then follows up with a frogsplash off the top rope. Owens covers for the three count.

- Owens gets up after the match and talks trash to Orton while he’s still on the mat. The ref raises Owens’ hand, then he rolls out of the ring and SmackDown goes off the air as Orton recovers from the frogsplash. 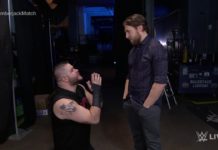 March 3, 2018
According to Dave Meltzer of the Wrestling Observer Newsletter, Neville has recently been in talks with WWE regarding returning to the promotion. The target...

March 2, 2018
[youtube https://www.youtube.com/watch?v=8nuivXFr7C4?rel=0&w=560&h=315] WWE has reportedly offered developmental deals to indie stars Keith Lee and Walter, according to The Wrestling Observer Newsletter. If accepted, the deals...

March 2, 2018
It's been confirmed that WWE dropped "Crews" from Apollo's name due to school shooter Nikolas Cruz, who murdered 17 people at Marjory Stoneman Douglas...

March 1, 2018
Regarding WWE Universal Champion Brock Lesnar not being on Monday's RAW in Anaheim, Justin Barrasso of Sports Illustrated reports that Lesnar was scheduled for...

March 2, 2018
It's been confirmed that WWE dropped "Crews" from Apollo's name due to school shooter Nikolas Cruz, who murdered 17 people at Marjory Stoneman Douglas...

March 2, 2018
[youtube https://www.youtube.com/watch?v=8nuivXFr7C4?rel=0&w=560&h=315] WWE has reportedly offered developmental deals to indie stars Keith Lee and Walter, according to The Wrestling Observer Newsletter. If accepted, the deals...

March 3, 2018
According to Dave Meltzer of the Wrestling Observer Newsletter, Neville has recently been in talks with WWE regarding returning to the promotion. The target...
ad