WWE Superstar Finn Balor spoke with the folks at Ringside Collectibles while at the Ringside Fest 2017 event earlier this year.

During the interview, Balor spoke about his show-stealing performance against A.J. Styles at the WWE TLC 2017 pay-per-view.

“That was cool. Me and AJ had kind of like, avoided each other our whole careers,” said Balor. “AJ is someone that I’ve always looked up to and I’ve admired his work for a long time, but for many reasons we were always kind of in the wrong place at the right time. This was the first time we’ve ever had the chance to properly lock up and have a match, it was a cool experience for me.”

Balor continued, “Just feeling the energy in the building that night was probably the coolest thing like when we both stood in the ring together for the first time, that was a real cool moment to be a part of. AJ is ‘The Phenomenal One,’ I found out firsthand and hopefully we can do it again.”

“The Demon King” also discussed who he would choose to form an alliance with if he were to create a new faction in WWE.

“Actually, I’ve been thinking about this for a long time,” said Balor. “Obviously, someone who’s been my right-hand for my entire career, at least recent career since he came to America the first time, is Karl Anderson, who I don’t go anywhere without. So I’d definitely have Karl Anderson. Luke Gallows, probably the most underrated big man in the game.”

Check out the complete Finn Balor interview with Ringside Collectibles at YouTube.com. 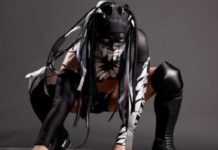