Finn Balor recently spoke with the folks from Ringside Collectibles during the Ringside Fest 2017 event. Below are some of the highlights from the interview.

On rumors of having an accident in his pants during a Samoa Joe match: “I want to tell everyone, there was a rumor that went around that I pooped my pants in that match, but it was actually the sweat on the baby blue trunks… So when Joe picked me up for the Muscle Buster and faced the hard cam, my butt was facing directly at the hard cam and everyone goes, ‘Oh my God, Finn’s pooped his pants!’ But it was just sweat, and maybe a little bit of Joe’s blood because I busted him open that day, too.”

On which wrestlers he would like to face at future WrestleMania pay-per-views: “There’s a lot of people I would love to face… Triple H, Undertaker, AJ Styles. Either one of them, singles, one-on-one. Listen, I could wrestle eight matches at WrestleMania if I wanted to. I’m fit.”

Check out the complete Finn Balor interview at YouTube.com. 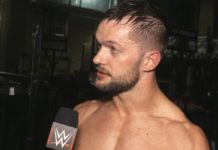 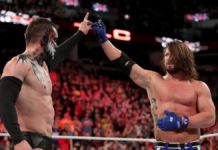 November 14, 2017
- Below is video from last night's WWE 24 special on Bill Goldberg, featuring Goldberg's reunion with Vince McMahon ahead of the big WWE...