As noted, CM Punk recently returned to training camp at the Roufusport gym in Milwaukee, Wisconsin to prepare for his second professional mixed-martial arts contest.

Punk’s coach, Duke Roufus, appeared as a guest this week on the UFC Unfiltered Podcast and spoke about Punk’s potential second fight in the UFC.

“[UFC President Dana White] and the matchmakers had their weekly matchmaking meeting yesterday, and we’ll get some news soon,” said Roufus this week. “Just think the first time you step in the Octagon, there’s something special you’ve got to deal with getting in there. For Punk, this sounds really weird, but now he knows what a beating feels like – a real beating.”

“I think [a loss like Punk suffered at UFC 203 in September of 2016] will help a lot of fighters to the point of haunting them, like, ‘No, I don’t want to feel this way ever again,'” Roufus said. “It’s not the physical. These guys are tough. It’s the mental anguish. You don’t want to feel that depressing, embarrassing feeling of getting beat up in front of God and everyone. It’s no fun. It’s been great motivation for him.”

Check out the complete Duke Roufus interview from the UFC Unfiltered Podcast at UFC.com. 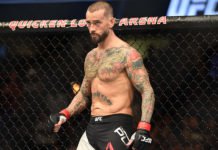 Kurt Angle Says CM Punk’s MMA Career Is Over, Thinks He Should Return To WWE

November 19, 2017
- Below is video of Lars Sullivan talking to Kayla Braxton after defeating Kassius Ohno in the opener of tonight's WWE NXT "Takeover: WarGames"...

A.J. Styles Hints At Retiring From WWE In A Couple Of Years

November 18, 2017
WWE Champion A.J. Styles recently appeared as a guest on 97.9 The Box in Houston, Texas, ahead of his "Champion versus Champion" showdown with...

Bret Hart Recalls Knocking Out Vince McMahon: “It Was Such A Beautiful Punch”

November 18, 2017
WWE Hall Of Famer Bret Hart recently spoke with The Calgary Herald for an interview. During the discussion, 'The Hitman' spoke about the night of...

November 16, 2017
On the latest episode of his podcast with longtime friend Christian, E&C's Pod Of Awesomeness, WWE Hall Of Famer Adam "Edge" Copeland reacted to...