The Young Bucks, Nick and Matt Jackson, recently spoke with the folks at Rolling Stone for an interview. Below are some of the highlights.

On getting deterred from signing with WWE after seeing issues some of the wrestlers have had there:

Nick Jackson: “Oh, for sure. What it does is it makes us feel like we’re making the right decision currently, because we’re happy, we’re not mad, we still love professional wrestling, we’re not burnt out, our families are happy, we’re healthy. When we see things like that, we feel like we’re making the right decision. Maybe it’s good that we didn’t take a risk a few years ago and stuff like that. At the same time, we have friends like AJ Styles who just became world champion again and we know how much money he’s making. There’s always that golden spoon over there, but for us as a tag team we know that some things like that would never be achievable. It would really just be a fake dream and it wouldn’t be something that we’d be interested in. I never got into the business wanting to main event a WrestleMania. I wanted to do cool things with my brother. I hate when most wrestlers say when you get into wrestling, your main goal should be to main event WrestleMania. No, it shouldn’t be, because that’s fake. No one does that. Only a certain amount of people do that. It’s like winning the lottery. If you get into wrestling thinking that you might be able to do that, let me cut your dream off right away and tell you it’s not happening.”

On CM Punk and Daniel Bryan:

Matt Jackson: “I talk to him [CM Punk] a lot. I bugged him for like, I don’t know, a year or two? I was really aggressive and at one point I realized that I should probably let him make his own decisions. He knows that there’s an offer there and he knows that I’m the first phone call that he should make if he decides to get back into the business. He’s told me that, he says when or if or ever he does decide to possibly get back into it, I’ll be the first guy he calls. It’ll be interesting. Whether or not he plays on our team or an opposing team, it’d be fun. When we’re talking about guys, another guy would be Bryan Danielson [WWE’s Daniel Bryan]. I don’t see him necessarily joining Bullet Club, but he’d be a fun guy to wrestle or to work with or whatever. Just to have him in the ring with us would be incredible.”

Check out the complete interview with The Young Bucks at RollingStone.com. 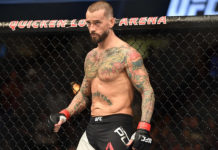 The Young Bucks Respond To Recent Criticism From Roman Reigns

Why Did Vince McMahon Just Unload $270 Million Worth Of WWE Stock?

March 27, 2019
WWE ring announcer JoJo took to Instagram today and announced that she is expecting her first child this coming June. The baby boy is...

March 27, 2019
We noted before this week's WWE SmackDown hit the air how it appeared that the women's Fatal 4 Way between Mandy Rose, Carmella, Naomi...

March 27, 2019
WWE Hall of Famer "Superstar" Billy Graham has once again made controversial comments on Facebook. Graham took to the site last night and said...

March 27, 2019
A Falls Count Anywhere stipulation has been announced for The Miz vs. Shane McMahon at WrestleMania 35. Miz challenged Shane to the stipulation on...