For those waiting for news coming out of UFC 218 regarding CM Punk’s MMA future, you’re going to have to continue to wait.

UFC President Dana White noted prior to the event that Punk was scheduled to fly in to Detroit, Michigan, the site of Saturday’s UFC pay-per-view, to meet with him about possibly entering the Octagon for a second time.

At a media scrum held earlier this week, White spoke about his plans to meet with the former WWE Superstar, who lost in his lone professional MMA bout to Mickey Gall via first-round submission at UFC 203 in Cleveland, Ohio last September.

“CM Punk is coming this weekend and wants to talk to me,” said White when asked by a reporter if he’s interested in having Punk fight a second time in the UFC. “He’ll be in Detroit.”

When asked whether or not he has interest in booking Punk to fight inside the cage again, White seemed non-committal.

Punk did travel to Detroit as expected, but as of the post-fight press conference held immediately after the event, he had yet to meet with the UFC boss man.

White spoke about Punk again at the post-fight press conference, noting that he made the trip to Detroit and came out to the Octagon with his teammate, Paul Felder, for Felder’s fight with Charles Oliveira at the show.

“He just came out to support his team, we haven’t talked about anything yet.” 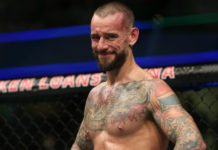 December 5, 2017
- We previously posted video of WWE Hall of Famer Sting teaming up with a fan to deliver a prank on the recent WWE-themed...

Ship Setting Returns For WWE’s Tribute To The Troops, Photos From Events In San...

December 5, 2017
WWE will be returning to an outside setting for their 15th annual Tribute to The Troops special today in San Diego, California. This is...

December 5, 2017
- Below is video of Jinder Mahal and SmackDown Tag Team Champions The Usos taking a boat ride through the artificial river inside Parque...

December 3, 2017
- WWE is offering complete matches from past WWE Clash Of Champions (and/or Night Of Champions) events for free on their YouTube channel as...

December 3, 2017
For those waiting for news coming out of UFC 218 regarding CM Punk's MMA future, you're going to have to continue to wait. UFC President...